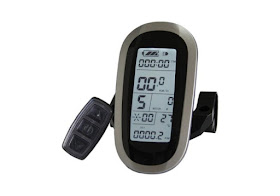 Alan Scholz recently gave me a new KT-LCD6 display console for my ebike. It’s a bit bigger than my old KT-LCD5 console, but it shows me a few things that my old display didn’t. In addition to the usual speed, average speed, trip distance and total mileage, the new console also show me the current temperature, my cadence and the number of Watts the motor is consuming.

The temperature sometimes reads a bit high if the bike has been sitting in the sun, but once I’m rolling it seems to be pretty accurate. I couldn’t find an explicit way to select Celsius or Fahrenheit for the degree display, but if you select kilometers for your distance measurement the console assumes you’ve bought into the metric system and will display the temperature in Celsius degrees. If, on the other hand, you measure your distance in miles, the console figures that you are one of those quirky Americans who still measures the temperature in Fahrenheit degrees.

The cadence reading tells me what I already knew, that I tend to spin in the 80 to 90 RPM range. It’s a habit that got drilled into me early on. Several years of fixed gear and single-speed riding expanded my cadence and power range so I can comfortably grind up hill and spin down the other side, but given multiple gears and choice I tend to settle in around 85 RPM. With my ebike I often leave the power level set at three (out of five) but I use the gear shift quite a bit to keep my spin rate and effort in the same comfortable range as the terrain or winds change.

The Watt reading is the one I’ve found the most informative. While articles like this one:

provide a good explanation of Watt Hours and try to inject some reality into the often inflated world of ebike range claims, the truth of the matter is people ride ebikes in a wide range of ways and the phrase “your mileage may vary” is very, very true.

Take for example the “real world” estimate of 20 Watt Hours per mile. Even before I got the Watt Meter, I knew that I wasn’t that many Watt Hours. I knew this because of math. I have a 36 Volt 12.5 AmpHour battery on my bike. Since

My battery’s capacity is 36*12.5 or 450 Watt Hours. Taking the 20 Watt Hours per mile estimate, I should expect 450/20 or 22.5 miles of range. But I was regularly going 50 or 60 miles before my battery meter would read ¼ full and then I’d charge it up. Alan told me he was getting similar results. Obviously, we weren’t using 20 Watt Hours of electricity to go a mile, something else was happening. Getting mileage like that would indicate that Alan and I regularly use more like 6 or 7 Watt Hours to go a mile.

There are several factors that contribute to our better than expected numbers. First off, Bike Fridays, even with the added weight of motors and batteries, are lighter than most other ebikes. A lot of ebikes are heavy and frankly not much fun to ride with the motor off. They need their motors to overcome their portly design. My Bike Friday, with the motor off, still rides like a bike.

Second, both Alan and I are what I call “fit old codgers.” I’m sixty and Alan’s a few years older. We’ve been riding bikes for years. We don’t want electric motorcycles. When we get on a bike, we expect to pedal and we do. We’re willing to have the motor help a bit, but we still tend to do the majority of the work involved in keeping our bikes rolling down the road.

Finally, Alan and I both live, work, and shop in the relatively flat Willamette Valley floor. When we do go out on spirited weekend rides in the hills or carry touring loads in the mountains, we wind up using more Watt Hours. But even then, we both find we do quite a bit better than the pessimistic 20 Watt Hours per mile estimate.

I’ve found riding with the Watt Meter to be quite informative. The motor provides most of its kick when I pull out from stop lights, that’s when the Watt number climbs. When it comes to maintaining cruising speed, I can see that as I push a higher gear, the motor draws fewer Watts. And, of course, when I’m coasting or in a tuck going downhill, the motor doesn’t have to do anything.

The Watt Meter lets me see how adjusting what gear I’m in or what power assist level I’ve selected affects my range. I’ve always been more interested in going far as opposed to going fast, so I find myself trying to minimize the motor’s contribution and maximize my own. But I have found that for my commute, if I have the assist level set to 2, I average about 13 mph while drawing 80 Watts. If I punch the assist up to level 3, my average speed climbs to 16 mph while the Watt draw is 100. Running the numbers on this I get:

I find the small decrease in mileage to be worth the extra three mph. At levels 4 and 5, however, the power consumption is quite a bit greater. Wind resistance increases exponentially with speed, so moving at greater speed takes quite a bit more power. For myself, I virtually never use the higher power settings. I also tell customers that the higher settings (4 and 5) are designed to spin the motor fast, not really provide more power. When climbing, you are going to be going slow and the lower settings (1 through 3) will be more efficient in terms of helping you out. As Alan says “it’s an e assist, you’re still going to be getting a workout climbing a hill.”

One final word of caution with the Watt Meter: like any gadget it can be a distraction. Don’t forget to keep your eyes on the road. 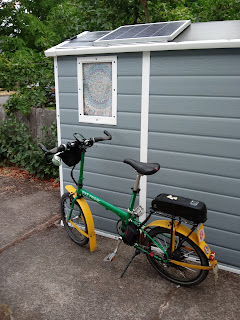