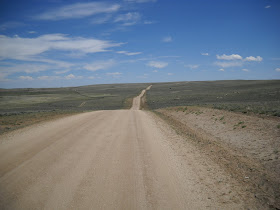 John Howard noted that the bicycle is a curious vehicle in that its passenger is its engine. Because of this fact, the bicycle rider is immediately and intimately aware of the resistance or ease offered up by various road surfaces. While the motorist or cartographer may find road surface to be a minor detail, one to be noted with a bit more pressure on the gas pedal or slightly different line on the map, those of us who turn the pedals to roll our wheels grade our roads on a much finer scale. Roads are not merely paved or unpaved, smooth or rough, they are complex characters revealing their true natures when the rubber meets the road.

It is not surprising that the driving force behind the early movement to create smoother roads were the bicycle riders. Beginning in the late 1870s and continuing for the next half a century, The Good Roads Movement preached the Gospel of Good Roads. If we were to whisk one of our cycling forefathers and his highwheeler forward in time to show him the world we've built upon that vision, he would no doubt be amazed but might just as likely to gaze upon eight lanes of cars stuck in freeway traffic and inadvertently quote David Byrne, "My God... What have I done?"

While some may argue that we have in fact paved paradise and put up a parking lot, we nonetheless seek to smooth our way in the world. While I can and do love a rough road or a trail too tough for any wheel, I also must admit that I'm a sucker for a smooth stretch of highway. I guess that makes me human.

While smooth asphalt is good for going fast, smooth concrete is better. I'd love to see somebody with a Watt-meter put some numbers down to back up my assertion, but my legs tell me it's true. It's not just your tires, it's the road your tires are on.

My friend Jan over at Bicycle Quarterly has done some great studies relating tire pressure, construction and road surfaces and anybody remotely interested in the subject would do well to read his magazine. To overly simplify a complex subject, it's complicated and high pressure tires are not always your best, fastest or most comfortable choice.

Somewhere between gravel and pavement is a creature feared by bicyclists, the chip seal road. Chip seal is a base of soft asphalt overlaid with crushed stone aggregate. Cyclists dislike chip seal because it is a rough ride and it tends to be slow going. Somewhere years ago I found a reference to trucking companies actually factoring chip seal roads into their fuel calculations because it's higher rolling resistance affects mileage. Cyclists tend to feel the roughness via their hands and butts while the resistance is felt in their legs.

Chip seal is often used on roads with low traffic volumes, the ones cyclists often tend to favor. In a conversation with a DOT traffic engineer I learned that a road can often be maintained with chip seal at a cost about 1/8 that of a full re-pave and while the lifespan of chip seal is less than full asphalt repaving (about half) the cost savings are what is driving it's continued usage. In today's tight economic times, the traffic volume guidelines for which roads get asphalt paving and which get chip seal have been revised upwards. While a few years ago only roads having traffic counts below 2500 cars per day might get chip seal, now roads having as many as 10,000 cars per day may be chip sealed. (I'm recounting this from memory and my exact numbers may be wrong, but the basic message is this: many more roads are getting chip sealed these days.)

I also learned that there are grades of chip seal and while the finer aggregate costs more per ton, it is often the case that in the field the engineers have to use less aggregate with the finer grade stone. This results in a smoother road for drivers and cyclists with a final cost that is the same or less than if the locality had opted for the cheaper, coarser aggregate. So if you are a cyclist and you hear of chip seal projects upcoming in your area, try to make sure the project uses the finer grade of aggregate. Also, often the road repair doesn't need to extend the full width of the road. Chip sealing the main traffic lane but preserving a strip along the road shoulder both saves material and gives cyclists a smoother defacto lane. The photo below shows a portion of US Highway 20 (the North Cascades Highway in Washington state) where the chip seal has been applied in this manner. While the state DOTs tend to be aware of these considerations, that is not always the case in local municipalities so it's important for local cyclists to do what they can to express their concerns in the planning stages of local repaving projects. 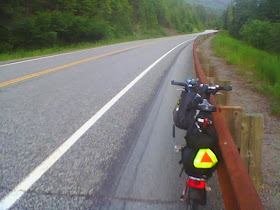 Roadie or Mountain bike, triathlete or tourist, we all ride on roads or trails. And the routes we travel don't just happen, we make them happen. On my best days, I remember to do my bit to keep things rolling.