Running an Ebike on Solar Energy: The Sheddy Kilowatt Story 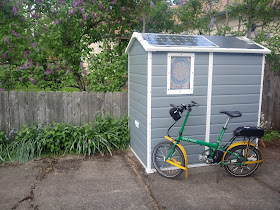 Five minutes after I installed a solar panel on the roof of my bike shed it began to rain. Since this was April in Oregon, the rain was not an unusual or unforseen event and in fact the next five days were rainy and mostly cloudy. But even on those damp days my solar system managed to generate enough power to not only charge my ebike, but also my phone, Android tablet and radio batteries. After that first week, I knew that I had pieced together a workable system. It's not fancy or particularly elegant, but it gets the job done.

Sparky, my eBike, runs off a 36 Volt, 12.5 AmpHour Lithium-ion battery Since Watts equal Volts times Amps, Sparky's battery holds 450 WattHours of power. Sparky's stock wall charger plugs into a U.S. standard 120 Volt AC outlet and puts out 42 Volts DC at 2 Amps so it puts out 84 Watts in an hour. To completely load Sparky up with 450 Watts takes about five and half hours if I plug into the wall. Charging off the sun is a different story.

The hundred Watt solar panel I got from eBay only puts out 100 Watts in some theoretic, perfectly sunny world that I certainly don't live in. And even if the panel were to miraculously put out 100 Watts, it would do so only at a maximum voltage of 18 Volts. I needed to get that up to a steady 42 Volts to charge Sparky.

My first thought was to get what is called a "boost controller." This is a device which will take a variable voltage input (like what a solar panel puts out) and boosts it to a constant voltage. Like damn near everything these days, the Chinese make an inexpensive one you can buy on eBay, so I ordered one to go with my solar panel. 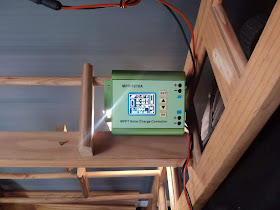 The device is marvelously complicated and came with a manual that had obviously been translated into English by a not too bright robot. Here is an actual paragraph from that manual:

After reading that I decided to initiative my own rope move and I went on YouTube and found some guy with a British accent who had messed around enough with one of these controllers to figure it out and explain it in such a way that even a dumb American like me could use it. Following his instructions, I set up my boost controller put out the 42 volts I needed to charge Sparky's battery.

While that system worked, the flaw in my plan quickly became apparent, I had to have Sparky parked in the shed and plugged in to get the power off the panel. The panel doesn't generate power at night and in most of the daylight hours, Sparky is at work with me. While I could just charge Sparky using the main power at work and have my employer pay the power bill, that is not at all what I wanted to do. I want to run Sparky on sunshine.

Sir Robert Watson-Watt, the inventor of radar, once said "you get one idea today, you get a better idea tomorrow, and the best idea...never." My next idea was to add an intermediate storage battery to the system and as I researched and thought my next, next better idea was to get a little integrated battery/inverter Power Bank unit. I found a good one, again made by the Chinese and available on eBay. 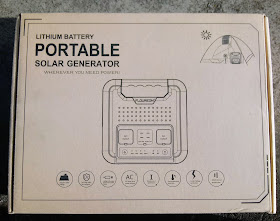 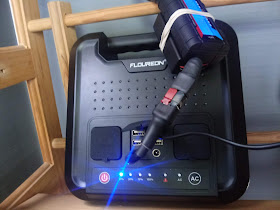 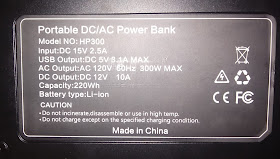 I also got a little recording Watt meter which is not needed for the system to work, but useful in that it tells me how much power the panel is generating and how much has been stored. The Power Bank has a little 4 LED power meter but the Watt meter gives me a clearer picture of what is going on.

The Power Bank has built-in circuitry that lets it take power straight off the solar panel, so I no longer need to use the green boost converter. The solar power, up to 220 WattHours, gets stored in the Power Bank's internal Li-ion battery. The Power Bank charges up during the day while Sparky and I are at work.

You might have noticed that the Power Bank has roughly half the capacity that Sparky does. That means that if I came home at the end of the day with Sparky completely depleted, even if the Power Bank was fully charged, I could only charge Sparky's battery half way. If that actually happened, I'd need a second day to charge the Power Bank and then transfer that power to Sparky. In practice, I'm a pretty frugal ebike rider and in a week of commuting and errands, I only use a few hundred Watts.

The actual truth of things is that even with less than great weather and the inefficiencies of various intermediate batteries and inverters, my little solar system gives me more than enough power to keep Sparky humming along. In fact, I have more than enough power so I also use the power bank to keep my phone, tablet, and radio charged up. All the words and pictures in this post come are here thanks to solar power. 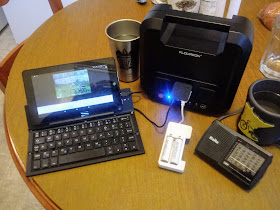 If you want to build a system like mine, the only two parts you really need are a Solar Panel and a Power Bank. The prices of these things tend to fluctuate. I paid about $100 for my 100 Watt panel and $131 for my Power Bank. I consider it money well spent.